When comparing high resolution to greater accuracy in interactive whiteboards, the two aren't relative. In most situations, people inquire about the degree of resolution in our interactive whiteboards. The public concept usually is “the higher the resolution of a whiteboard, the greater its ability to select and touch minimal components on the screen.” However, this is not the case. Intech offers you an in-depth view of everything involved.

1. What is Resolution?
From different points of view, the definition of resolution may vary significantly. Concerning the interactive whiteboard, the concept of resolution varies between the projector resolution and the touch resolution.

3. When it’s the Projector Resolution
Their resolution is normally measured by the pixel. Pixels refer to the number of tiny points or dots that collectively develop the image on the screen. For most up to date projectors, they usually have the XGA resolution. The XGA is represented by the values 1024 x 768 at a sum of 768,432 pixels. Nonetheless, for the SXGA projector, the dimension is 1280 x 1024 which totals up at an approximate 1.31 million pixels. On the other hand, a projector’s resolution can be further evaluated through the resolution information offered by the computer attached to the projector. This way, when one sets the computer resolution to the 800 x 600 scale, and your projector can process up to 1024 x 768; the final displayed image will offer the resolution 800 x 600. Additionally, when you set the computer at 1400 x 1050 resolutions, and the projector is only able to process at 1024 x 768 resolutions, the final display image will be at 1024 x 768. 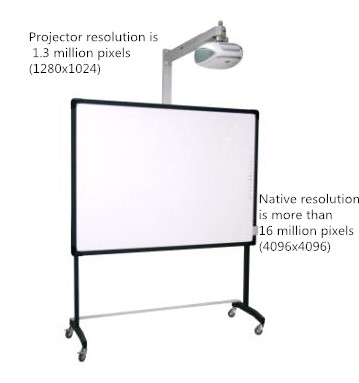 As a crucial aspect, the interactive whiteboard serves as a projection surface rather than the monitor. It only offers the image projected by another device such as the projector. Therefore, its resolution does not at all influence the accuracy and touch precision.

When talking about the degree of interactive whiteboard resolution, there won’t be a significant impact performance when the projector’s resolution is lower.


Previous：Why You Need a Dual Purpose Smart Board with PolyVision Ceramic e3 Surface?